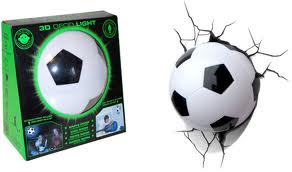 A variety of 3D Sports Deco Lights designed by Tom Wegrzyn to be available at Walmart Stores Across Canada on July 28th, 2012 will feature home grown Canadian Talent from Talent INC Canada of Toronto.

When Canadian Father, Artist and Entrepreneur, Tom Wegrzyn, began shopping for the nursery of his first son, he was disappointed with the selection of night lights available on the market. With soccer bound dreams for his then newborn son, Tom took to the drawing board and conceptualized the first 3D Deco Light.

Fast forward to the present - a variety of 3D Sports Deco Lights designed by his Canadian company, 3DLightFX, will be available at Walmart Stores across Canada in the “Do It Yourself” section beginning July 28th, 2012. 3DLightFX is looking to feature home grown Canadian talent to model for the new product packaging that will hit the shelves in the US and Canada in 2013.
Talent INC Canada is a community of young performers, parents, and industry professionals who all work together to collaborate during after school workshops, private coaching, special one day seminars, summer camps, and their internationally acclaimed National Performer's Conference, held in Toronto.

Starting July 28th at Walmarts across Canada and online at http://www.3DLightFX.com, 3DLightFX’s cordless and environmentally-friendly 3D Deco lights will be available. 3DLightFX launched the first of the innovative designs last year, a regulation sized soccer ball that with the included crack sticker, gives the effect that it has been kicked into the wall. With new designs; Hockey Pucks, Baseball and Basketball joining the Soccer Ball on the shelves the response has sparked a frenzy with new parents, teens and men looking for a cool addition to their man caves.

“This new campaign is totally driven by social media and will be a fun way to give back to the youth in Canada that this product was designed for,” says Tom.

He went on to tell us about how some of the kids at a local Talent Academy in Toronto had been buzzing about the product and it was their interaction on their Facebook page and the comments left on 3DLightFX‘s YouTube channel that prompted Wegrzyn to contact Talent INC Canada about hosting auditions for their campaign.

Wegryzn, and the owners of Talent INC Canada, Doug Sloan and John Stevens have just announced that they will be joining forces on July 27th for a local model search. Those selected will be offered a photo shoot featuring the 3DLightFX products to be used on their website, packaging and social media outlets.

To register for this audition please send an http://info(at)talent-inc(dot)ca or call (647)748-7200
Auditions will take place at the Talent INC Canada studios July 27, 2012 and is open to all kids ages 4-17 in the Greater Toronto Area. However, due to the huge response nationally, we will open this casting to all Canadians!
Posted by Talent Inc. Director at 9:19 AM No comments:

Talent marketing giants Doug Sloan and John Stevens of Talent INC. Canada, and Tobi Leveille of Promenade Dance Academy in Winnipeg have joined forces to bring awareness and information about the entertainment industry to Manitoba. With the onslaught of reality TV competitions like “So You Think You Can Dance Canada”, “Canada’s Got Talent” and “Instant Star” there has been a rash of entertainment companies that have sprung up that prey on young hopefuls. Talent INC. Canada and Promenade Dance Academy have banded together to dispel the many myths surrounding the industry, focusing specifically on the Canadian Market. 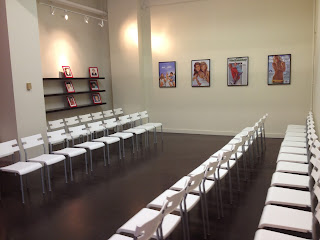 Winnipeg, Manitoba, Canada (PRWEB) June 19, 2012
When Tobi Leveille’s daughter, Anne, first came to her and expressed an interest in the performing arts it came as no surprise to her. Given that Tobi herself has been a vibrant part of the dance community in Winnipeg for over 30 years, she thought it would only be natural that her daughter would follow her lead.
“But Mom… I want to act. You know, like on TV and in Movies and stuff”, said Anne who was 6 years old at the time.
Tobi admitted, “I really had no idea where to turn and ended up spending a lot of time, energy and a great deal of financial resources pursuing her ambitions”
The purpose of the workshop to be hosted by Promenade Dance Academy is to give parents the tools and proper information they need so that when they meet with people who want to work with their kids, they know what questions to ask and they know what fees and services are acceptable and which are not.
Since the dawn of YouTube, and reality TV shows like, Canada’s Got Talent, So You Think You Can Dance Canada, and The X Factor, parents and kids alike have been obsessed with instant stardom. It is an obsession that is polluting legitimate performing arts institutions globally.
“No one wants to work at it anymore!” exclaimed Doug Sloan.
“These kids and parents see these performers make it seemingly overnight and they think it is easy. They don’t see the hours of training, and countless hours of practice”, added Tobi.
“Parents need to be the first line of defence to protect their kids from unscrupulous companies that prey on the hopes and dreams of young people” said John who is an accomplished performer with credits all over the world and now co-owns Talent INC. Canada with his partner Doug Sloan.
Doug and John first met Tobi and Anne in 2008, and were immediately impressed by the fact that Anne had not only the desire to be in the industry, but she also had the determination. She takes her critiques well, and is goal driven according to Sloan and Stevens.
The workshop is designed for parents and young performers and is completely interactive. Parents get to see their child work with Mr. Stevens who is a master level coach with a long list of now celebrity clients. Each child will receive critiques from both Mr. Stevens and Mr. Sloan as well as learn about the business side of acting.
A handful of young performers and their families will be invited to attend a training bootcamp for performers in Toronto, where talent will have the opportunity to not only further their education in the arts, but they will also have the opportunity to network with some of Canada’s top casting directors, directors, producers, and agents. There will be a short list of top agencies from NY and LA in attendance as well who primarily scout for the fashion industry where it is easier to get sponsorship across borders.
If you would like to attend this Audition Workshop please contact info@Talent-Inc.ca, or call their studios based in Toronto at (647)748-7200. Admission to the workshop is free, but space is limited.
ABOUT PROMENADE DANCE ACADEMY
Ms. Tobi Leveille has been involved in dance for over 30 years studying ballet, tap, jazz and modern at various schools and with many different teachers in the province. In 2003 she received the Royal Academy of Dance Teaching Certification in classical ballet, a standard of teaching that is recognized professionally world-wide. She has prepared students for classical ballet examinations at various ages and levels, including pre-professional and professional certification levels. She has also mentored other student teachers towards certification.
Promenade Dance Academy boasts six programs that offer a diverse schedule of classes in dance, gymnastics, and fitness for 2 years old all the way to senior adults. The staff consists of very well known and respected individuals across a wide variety of genres in dance circuits around the world.
Posted by Talent Inc. Director at 9:26 AM No comments: 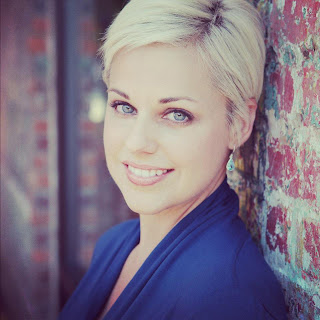 Congratulations to Giovanna who recently was cast as the “Wardrobe Stylist” for the upcoming film, You Are Here. You will catch her in scenes with Owen Wilson, Greg Cromer, and Alana de la Garza.
Giovanna was a stand out performer at the recent Talent INC conference, and presents herself with such confidence and professionalism.
She said she had a great time on set, and had 2 full days of filming. What a GREAT experience!
From everyone at Talent INC, we wish you a hearty congratulations, and we expect to see a lot more of you!
More info about the movie:
Matt Weiner wrote and will make his feature directing debut on Gilbert Films’ You Are Here, a road-trip movie starring Owen Wilson and Zach Galifianakis that begins shooting in May in North Carolina. Amy Poehler is in negotiations to co-star. Weiner, who has directed several episodes of his Emmy-winning Mad Men, will fit this in between seasons of the AMC drama, which returned Sunday after a long absence to record ratings for its Season 5 premiere. “This movie has been my passion for eight years and to see it come together with Owen and Zach and Amy is a dream come true,” Weiner said in a release announcing the film. “I can’t wait to get started because the movie is about everything I care about and I’m tired of reading it out loud to my friends.” In You Are Here, a local weatherman and freewheeling bachelor (Wilson) and bi-polar man-child Ben (Galifianakis) are childhood best friends who embark on a road trip home after Ben discovers his estranged father has passed away. Once there, Ben learns his eccentric father had big plans for him and he’s inherited a whole lot more than his father’s money. As Ben struggles with his new responsibilities, his friendship with Steve is tested by the complications of his inheritance, his sister’s ambition, and Steve’s desire to be with his father’s beautiful young widow. Poehler will play the sister. Gary Gilbert, Scott Hornbacher, and Jordan Horowitz are producing. Lionsgate is handling international sales.
Posted by Talent Inc. Director at 3:27 PM No comments: